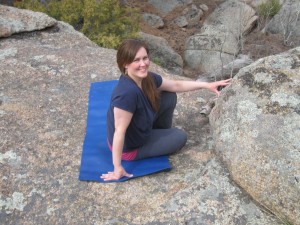 I have always been interested in movement, having danced throughout my childhood and early adulthood. So it was not that strange when I found myself in my very first yoga class in 1995. Little did I know the stillness, not movement, that is involved in this practice. It was not until a few years later, however, that I truly connected with this stillness, in 1999, through a local inspiring teacher, Karin Nilsen. It was through Karin that I decided I wanted to share how good I was feeling from this thing we call “yoga.”

I have now been teaching yoga for almost 15 years. Throughout the last 20 years, I have continued to study and practice and continually learn. Some of this study has been local, and some has called for me to travel in order to be with outstanding yoga teachers who are known nationally and internationally, including Cora Wen and Judith Hanson Lasater, whom I consider to have been two of my main teachers in this journey.

In 2007, I completed the first level of Relax and Renew® Training with Judith Hanson Lasater.

In the last few years, I began enjoying workshops with Amy Matthews and Mary Paffard and started another branch of my yoga journey with local teacher Susi Amendola.

Even though my background is primarily in yoga, I have also studied tai chi almost as long, mainly, in the beginning, with Bruce Ballai and the Omaha Tai Chi Association. Eight years ago, I began to teach this practice as well. Teaching tai chi is still young to me and a new adventure. I appreciate how thrilling it is to watch the benefits of this practice unfold before me in students of all ages.